Astrophysics as a profession

Astrophysics is by no means a common academic discipline that churns out thousands of graduates each year – it is a special field of study. Physics and math are essential components. Those who decide to study this subject enjoy tackling complex scientific issues or are simply inquisitive and fascinated about cosmic objects or nature in general. But what about after graduation? Which paths can be followed, and how can astrophysics lead to a career? An interview with Philipp Richter, Professor of Astrophysics at the University of Potsdam. 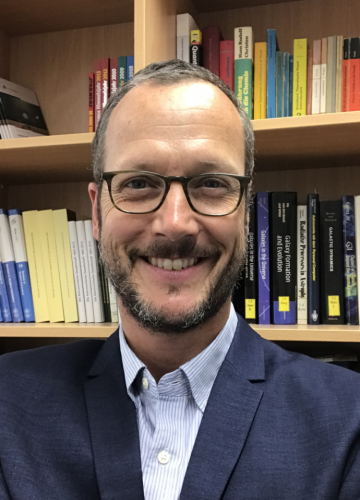 Philipp Richter has been teaching at the Institute of Physics and Astronomy of Potsdam University since 2007. He conducts research in the field of interstellar and intergalactic matter, and teaches on the Bachelor program in Physics as well as on the Physics and Astrophysics Master’s programs. He lives in Berlin with his wife and three children.

How did you decide to become an astrophysicist?

I started studying physics at Marburg purely for my own sake. In fact, I have always been interested in physics and I wanted to prove to myself that I was able to tackle this difficult study program. After completing my interim examination in Marburg , I decided to switch to Bonn, where lectures are offered in the field of astronomy or astrophysics. It really excited me. Even back then, I found it fascinating to be able to use the normal laws of nature applicable to Earth in order to describe cosmic phenomena, the only difference being that the time scales and dimensions are completely unique. Unlike in experimental physics, astronomy is a field that you cannot touch. Instead, you use physical laws and concepts to develop models and then look to see whether your observations tie in with these models. In other words, you have to be pretty creative. Which I also found exciting.

After graduating, you went straight on to do a doctorate. Was it a well-defined path towards a scientific career?

It was not clear from the outset that I would embark on a scientific career. But when I completed my Diplom thesis on the topic of globular clusters, I was offered the chance to do a doctorate – although it was in another topic, namely UV astronomy. I took up the offer immediately, and was quick to finish my doctorate because, again, I had been offered a postdoc position in the US. I can safely say that my work in Wisconsin was one of my most productive periods. I then gained a DFG fellowship to continue my independent research in Florence, where I stayed for quite a while. Actually, I only set myself time limits for the individual career steps by saying to myself: I’ll research that now, and then we’ll see what comes along after that. But I always kept an eye on whether it was worthwhile changing locations, and where my path was taking me.

Was it easy for you to find a position in Germany?

Well, I had to write a lot of applications. And there was definitely a bit of luck involved. It was by chance that I applied for a post that took me back to Bonn while I was in Italy: a tenured, adjunct faculty position had become vacant in Bonn. An absolute rarity. After all, even back then the labor market was rather limited. In Bonn, I then set up my first own research group. But I think the most important decision in my career was to go to the US after completing my doctorate. And yet it wasn’t that easy. I was already in a relationship with my wife-to-be and we had to decide whether I would go abroad without her for several years, and which countries would be an option. After all, my wife can only practice her profession as an attorney in Germany. We knew that having a long-distance relationship could create difficulties, but we took the plunge and it worked out really well. During our time apart, we made great advancements, both as individuals and as a couple. When we both moved back to Bonn, we agreed that whoever found the best job would decide where we would move to. I then accepted a professorship in Potsdam, and moved there with my family in 2007.

What are your tasks at the university as a Professor of Astrophysics?

To begin with, I teach students. I give lectures in astrophysics and also teach in experimental physics. Which, of course, also involves exams. I quite enjoy this work. I’d say that teaching takes up about a third of my time. A slightly different aspect is providing support to students and doctoral students. A lot of time is required for committee work and administration, 40 percent altogether, I’m sure. So that takes up a lot of my time. Which means that around 20 percent of my time is left for research. I try to take time out for this aspect of my work. Time for actually programming and evaluating the data myself. My target continues to be to produce one scientific publication a year.

The notion of a scientist observing stars now seems to be rather outdated. How would you describe astrophysical research?

Nowadays, the boundaries in astrophysics have become blurred. In other words, it is no longer possible to make a clear differentiation between theoretical and observational astrophysics, which used to be the case. For example, everyone who uses the Hubble telescope for observations is in fact also a theorist because models are required to interpret the observations. As an observer, you need to physically delve into the data. In this sense, the number of theoretical aspects involved is constantly growing.

Is this development also reflected in your own work?

I continue to be observation-oriented. This means that I start out with observation data that I then attempt to physically analyze. But I haven’t actively used a telescope for observation purposes for a long time. This has nothing to do with the fact that I am now a professor. It’s just that observatory astronomy on the whole is becoming increasingly complex. Modern large telescopes have become extremely complex. It is now rare to work in the way I learned – working single-handedly with a telescope and doing everything yourself, going up into the dome, setting everything up, cooling the instruments, and so on. Nowadays, a big team is required to perform work on an international large telescope. In some cases, you do not even need to go up into the dome, for several reasons. You simply monitor the observation, as it were. But of course it’s a matter of time and money. Do I really need to conduct my work on site, if I think of the telescopes in Chile, for example. Hence one could say: we’ve become the victims of our own development. However, we do still have ‘romantic’ astronomers sitting here at their telescopes. For example, when I offer internships or show groups of schoolchildren the stars and planets at night using our telescope in Potsdam. But practical observation is increasingly rare when I conduct my own research.

In your opinion, what characteristics or skills should today’s budding astrophysicists have?

Those wishing to study physics or astrophysics should have an inquisitive nature. They will also need a great deal of staying power, that’s for sure. It’s not an easy study program – it is intellectually very challenging and you must be prepared to cope with failure along the way, e.g. when it comes to taking written or oral exams. I also believe that time management is important. Particularly with today’s study system involving Bachelor and Master’s degrees, students need to be able to organize themselves. You need to come to grips with these technicalities. But once you’ve managed all that, you’ll be excellently prepared for professional life. That said, all students differ and have their own requirements. In my teaching, therefore, I attempt to spin a common thread and teach the basic ideas behind the subject such that students can develop their own cross-links along the way. Physics permeates everything around us, you simply have to look a little closer. This cross-linkage enables you to develop an intuitive feeling for physics, for more profound physical interrelationships. Which is extremely important for a career in research. Prospective students should also be creative and capable of developing their own ideas and physically relevant scenarios – also beyond the mainstream.

And what about life after university?

Flexibility is the be-all and end-all. Which also includes spending time abroad: time for learning, networking and making yourself attractive to the limited labor market in Germany – that is, if you wish to work in Germany. You don’t necessarily have to do your doctorate abroad. From a time perspective, it may not in fact make much sense under certain circumstances. But a certain degree of flexibility is always needed. Also, the world of science ticks differently in some countries to here. Although this also depends to a great extent on the university and the people involved. By flexibility, incidentally, I also mean a certain amount of mobility within the discipline. In my case, for example, I worked with a UV satellite during my time in the US, and simultaneously put out feelers in other areas. At that time, it was rather touch and go with UV astronomy. The satellite that supplied the main data back then had a limited life span, and it was not sure whether there would be another UV mission after that one, and whether my field of research would survive. So I pursued more than one track. And, last but not least: I believe that researchers should also be communicative and able to engage in discussion with other people. After all, holding discussions about a scientific topic enables researchers to develop new ideas. Sometimes colleagues are able to provide assistance, for example, with mathematical methods. Shutting yourself up in a little room and thinking “I’m now going to map out my career” is not the way forward.

You have remained loyal to science. And yet: was there a time in your life when you contemplated pursuing alternative options?

Before I left Italy for Germany, I wondered what I would do if I failed to find a new position. Which industrial sectors could I perhaps approach? However, I did not have any clear ideas for a Plan B. But there was never a time when I specifically wanted to leave the world of science. Instead, I tended to set myself an age limit. And, as I said: I was also slightly lucky in being able to continue my work as a researcher.

Thank you for the interview.

The interview was conducted by Christine Kreutzer from science³ - Science Communication Agency.

Read more about Astrophysics as a profession in an interview with Professor Stephan Geier.